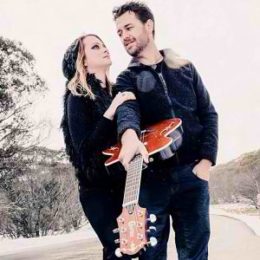 Adelaide’s most sought after Acoustic Duo, Trio, Band and DJ service. Bookings available for your Wedding, Pub, Club, Awards night, Party, Sporting event or Corporate function. Offering a relaxed blend of sweet ballads, classy lounge music, reggae, hip hop party favorites & original tunes for all your live entertainment, cover band, and original musician, guitarist and singer needs. May Rocket will get your head bopping and your toes tapping, and give you and your guests or customers a night to remember!

May Rocket are at the core, an acoustic musical duo from South of Adelaide, operating all over SA, in country and rural towns as well as the suburbs, and touring interstate, entertaining party goers all over Australia with high energy rock, Rap mashups, Dance classics, and chill-out sessions multiple nights a week… Playing at a pub or club near you soon (check our news ticker for where we’ll be next) and pop by, have a drink, jump on the dance floor and help us groove the night away.

In addition to Duo performances, May Rocket also works with other musicians, in Trio, Quartet, and larger band formats, as well as offering DJ and MC services for private events, background music at your pub or club, or center stage to entertain your audience, meaning we can offer you light acoustic services for your wedding ceremony, a full raging party band for your reception, and a DJ all in one package – get in touch to discuss, we’d love to hear from you! 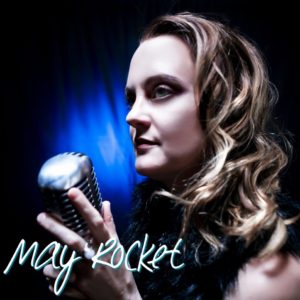 What is your role in the band? I do a lot of the lead Vocals and come up with some of the ideas of song choices and our own versions of songs. I play U-Bass to add depth and drive, which also it gives Rob the opportunity so unleash some of his axe magic

How do you feel about performing live? Honestly…. it scares me, but I’m told anxiety is just a sign you care about what you’re doing… when I see people dancing to our music however it is the biggest compliment and makes me so happy.

What instruments can you play? Bass. I can play guitar and piano but not very well… I mess around on the jambai too! I’m not like Rob, he is amazing at every instrument he touches and it comes so easily to him. I stick to singing mostly.

Who are your musical influences? Rob, everybody, any music I hear, I have eclectic taste in music, everything from punk to Pop. Right now I am inspired by all the talented lovely people we meet around the place at gigs.. all of the people we have met at various open mics when we were starting out. There are so many talented people around Adelaide and so many great original songs that aren’t heard in large scale but absolutely should be, so I feel privileged to hear regularly all of the precious gems around the place. I’m a big fan of Robs originals I love his choice of chords and how beautiful he can make them sound.

What is your goal as a musician and artist? Honestly, just to be comfortable expressing myself through music, and anything else is a bonus. Music makes me happy

Describe Rob? Rob is a very talented Musician, it is great to see him doing what he is so passionate about and it is a privilege to stand along side him. 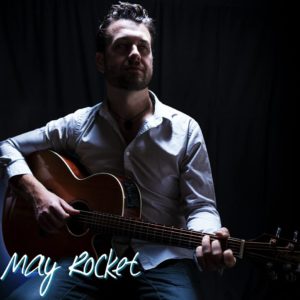 Guitarist, singer, songwriter, Drummer, and anything else that can be blown into, plucked, hit, tapped, rung, or is capable of generating a tone.. puts a unique spin on all the classics and dials back on the heavies. First picked up a guitar and keys as a toddler, Began drumming as a child, and dabbles in and on pretty much everything music, has performed live in originals and cover bands. Influenced by 80s and 90s rock and grunge. Rob has recorded CD’s with RNM and Section386, and two of his Originals “Secrets” and “What we’ve become” have been covered and released by Rock band Azzura.

What is your role in the band? Primarilly I’m the axe man, but I try to get a few lyrics in where I can do so without detracting from Carissa’s gorgeous vocals. In the background I write a lot of music, and handle most of the arrangements, and all the equipment & tech stuff, like the wireless mics, amps, effects, lighting recording, editing…. I’m the sound engineer, the web guy, the roadie and the marketing department.. I love bringing modern tech into our show, and musos and punters alike always find curiosity in some widget that I’m using they haven’t seen before

When did you first discover you were a musician? Very young…. maybe about 4yo I got a toy electric guitar for Xmas from Santa and that got me into it… my mum had a crusty old “Hondo” guitar, that I wrote a song on as a toddler titled “Get Well Uncle David”…. I’m not sure the song was destined to break any sales records, but, from that point on music was in my veins. My Dad used to teach me to play the organ as a toddler, admittedly, he was no pianist, but it allowed me to self teach some basic keys skills growing up. I took my first guitar lessons in primary school, the most influential on guitar being Ian Ceaborne giving me a solid background in classical guitaring, I took up drums shortly after, and started my first band in primary school, with my siblings making up half the band members. I’m not sure I actually considered myself a musician until I began getting a few paid performances though which started in my later primary school years.

What was your first paid performance? Busking in the mall…. as a child, myself on guitar and brother on trumpet, sometimes with my sister, would make a killing, We used to count up our gold coin treasure at the end of a weekend and it would often amount to more than some gigs do today! That’s when I first discovered people would pay us to do what we loved. My first official paid performance was a sporting awards night…. a promoter saw us busking in the mall and asked us to perform with the band at the time… “Mirage”…. I would have still been a primary schooler at the time…. I hired my first venue and put on my own show hiring other bands for the first time as a high schooler with a band called Section386… with 4 other support bands we had a packed house at the old lion/music house in Adelaide! There’s no better feeling than people willingly paying to see you perform, and from there, I just couldn’t stop

How do you feel about performing live? I thrive on it…. the combination of nerves, anticipation, adrenalin, and ability to control the mood of a room gives me a high. I love the feedback you get from a live audience, you instantly know from the expressions on faces and the bopping of heads and tapping of tables when people are getting into what your doing, and can feed on that energy…. to quote the castle, it’s all about the vibe!

What instruments can you play? Other than guitar, I’m a drummer and have drummed in bands in the past… I have recorded my own keyboard, trumpet and saxophone in the past too, and dabbled with flute and violin…. none of those things would be live performance ready unless it were for a single well rehearsed song, but it doesn’t normally take me long to pick up a new instrument and learn it.

Who are your musical influences? My biggest musical influence would be Mike How, my drum teacher from primary school. That guy arranged a lot of extra curricular music activity and performances outside of the school to ensure I was pushed forward and not held back, he really went above and beyond and tolerated a lot of crap. Other artists that influenced my playing are Offspring Nirvana and Greenday in my younger years Frenzal Rhomb showed me you don’t need rod Stuart’s voice to be successful, and gave me lots of great beer related tunes, jack Johnson, John butter, and more recently I developed a fascination for adelaide comedy rock band the beards who really do have the best music and most hilarious lyrics….

What is your goal as a musician and artist? World fame! That would be the ultimate for me I think… more realistically, I’m content having my tunes pay the bills, to be able to go on a “working” Holiday and have a local venue say, sure, we’ll pay you to entertain us… Don’t tell anyone, but I’d do it for free because I love it!

Do you have any hobbies or other extra curricular activities? Waterskiing, I’m renovating a houseboat I bought with the best mates the universe has to offer, the footy, I’m a die hard Crows fan, and I love watching movies just to get quotes I can use in everyday life.

Where would you like to be in 5x Years? On a beach with a Eukalele, sipping my 4th  pinacolada at 11am, writing a song about how great life is, my gal splashing in the waves with a surfboard, anticipating what songs the patrons will enjoy later that night at a small background basic gig at a beachside bar.

Sum yourself up in 3 words or less? Stubborn, Persistent, McGuiver

Describe Carissa? Carissa is an introvert extrovert. She is a go-getter that responds so well to attention and activity, but is somewhat shy and quiet about it. She is overly modest and critical of herself, a clean freak and perfectionist when it comes to her own work. Carissa is a creative genius and an ideas girl. She’s a very caring and empathetic person, seeing the best in people. Her personality carries through to her voice, which is beautifully sweet and tender…. it really is like sugar for your ears… she can make the harshest rock screamo tune sound like a pretty love song. If she can’t nail it, she won’t do it, and I adore listening to her sing, just as much as you will! 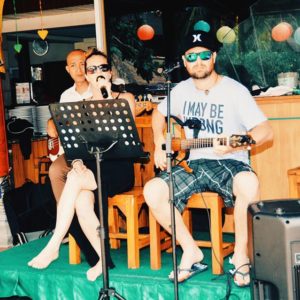 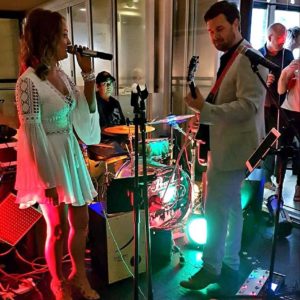 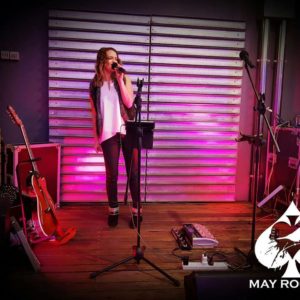 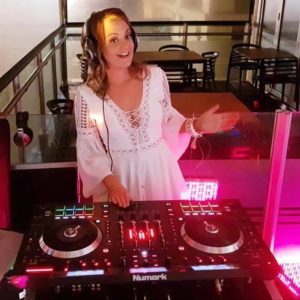 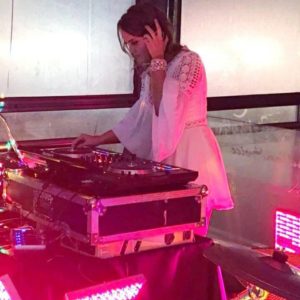 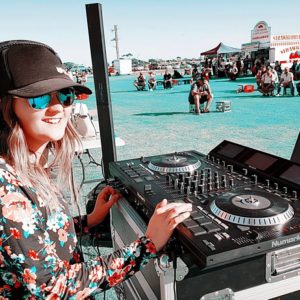 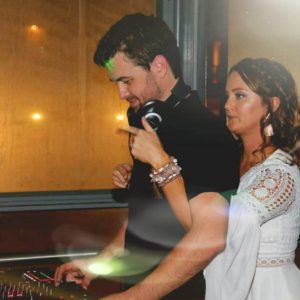 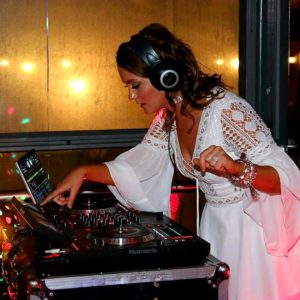