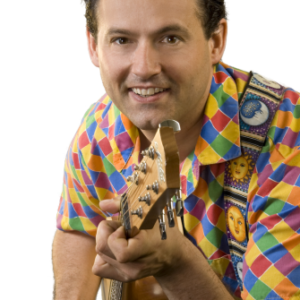 At the age of around 10, He began learning to play the organ with a brilliant teacher Brian Brown. During high school he enjoyed being an extra in some high school plays however music was not a big part of the curriculum then. Going on to teachers college he chose to study music as my major in my teaching degree. He learnt to play the guitar, recorder and drums, composed music for drama productions and went on tour with the wonderful Magill Band. It was around this time that  he began playing in cover bands and also began teaching music in primary schools. A highlight of his first 3 years of teaching in the Riverland was directing the Combined Catholic School’s Music Festival at Chaffey Theatre.

On his return to Adelaide, he had a go at writing my own songs and reached the final of S.C.A.L.A. with my song ‘The Flame’. Whilst taking his long service leave and being a ‘stay at home dad’ when my wife returned to work, he began writing and performing children’s music in 2007. He have since recorded 3 children’s CDs ‘Opening Doors’, ‘Get Moving’ and ‘It’s A Cool 4 Kids World’. Sales have surpassed 5000 copies all over Australia. My company COOL 4 KIDS performs Australia wide at Child Care Centres, Kindergartens, Primary Schools, Libraries, Community Centres, OSHC and Vacation Care, Festivals, Events, Birthday Parties, Christenings etc.

His band PULSE performs regularly at RYDGES South Park Adelaide Dinner Dance as well as at many Weddings (including Italian), Corporate Events, Private Functions, Wineries, Birthdays, Festivals and Celebrations. In 2013 Pulse band was awarded 99.45% satisfaction from Brides and Grooms in the Australian Bridal Industry Association Awards. He is fortunate to work with a team of incredibly talented and loyal musicians. They were able to offer a variety of wonderful Music Shows any time during the week.